Everyone has a right to know how sugary drinks affect health. Beverage companies spend over a billion dollars every year to convince us, and especially our children, to drink their products. But they don’t warn us of the risks. A low-cost and simple way to do that is to require the companies to apply a warning label to cans, bottles, and dispensers of sugary drinks, and to the ads, both in stores and outdoors, that promote them. The label would have a simple message like the one pictured above.

Advocates believe a sugary drink warning label will help people reduce consumption of sugary drinks, based on evidence showing that tobacco warning labels have small but positive effects. Warnings on tobacco may increase the knowledge of health risks, prevent relapse, deter youth and adults from initiating smoking, deter smokers when they are about to light up, increase the attempts to quit, and reduce the appeal of the pack.

Like warning labels on cigarette packages, sugary drink warning labels can alert people to the risks of consuming the beverages, and may even discourage people from buying them. Preliminary studies, conducted through on-line surveys, suggest that warning labels might change people’s perceptions of the drinks and their interest in purchasing them. After seeing the warnings, both adolescent and adult study participants were more aware of the health risks associated with drinking them. Adolescents were also less likely to buy them, and the adults were less likely to buy them for their children. 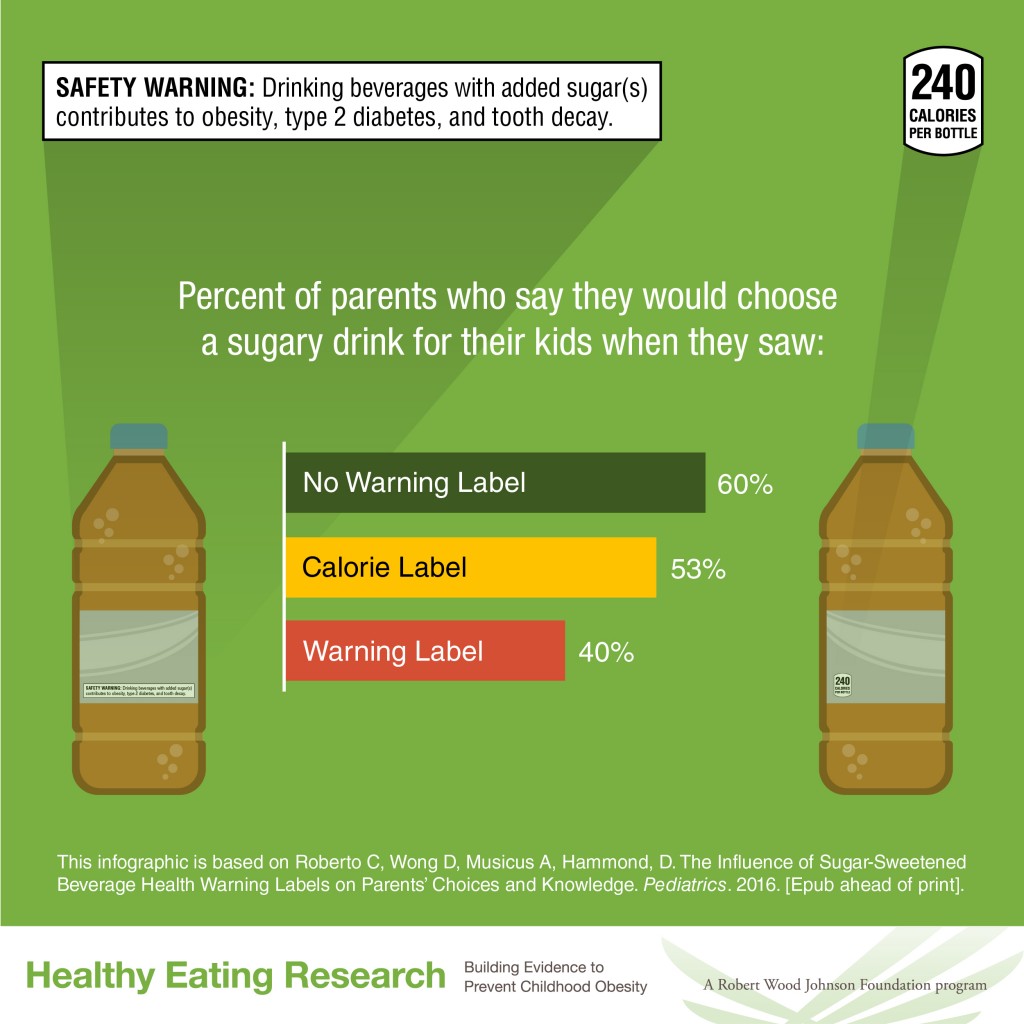 When surveyed, the public was overwhelmingly in favor of warning labels on sugary drinks. In a 2016 Field poll, 78% of Californians said yes to warning labels. Support varied by race and political affiliation, but a majority of people in all categories supported warning labels.

Campaigns to adopt warning label legislation, as well as the presence of labels on cans, bottles, dispensers, promotional ads, or at a point of purchase, help keep the awareness of the harmful effects of consuming sugary drinks in the public’s eye and on decision-makers’ radar. This awareness can be the catalyst to create and support other policies to reduce the availability, affordability, and even the appeal, of sugary drinks. The more policies we have in place to encourage consumers to shift to healthful beverages, and away from sugary ones, the better!

State and local governments across the country have considered policies to require sugary drink warning labels. While local and state warning label policies share the same goal of educating the public about the dangers of consuming sugary drinks, they employ different approaches.. States would place labels on the containers and dispensers themselves, whereas localities would place the labels on ads for sugary drinks, in order to avoid possible conflicts with state or federal law or problems with implementation. [For more information on these possible issues, see the helpful article by McLaughlin listed below or please contact us.]

In 2015 San Francisco became the first U.S. jurisdiction to pass a warning label bill. It requires labels on outdoor advertising. The American Beverage Association immediately sued to block implementation, claiming that, among other things, their products were being unfairly singled out as more dangerous than other high-calorie foods. However, a federal District Judge dismissed industry arguments and concluded that the City’s mandated warning is factual and accurate, and that sugary drinks are a significant source of calories that contribute to health problems. Warning that sugary drinks contribute to tooth decay, obesity and diabetes is also reasonably related to the City’s interest in public health and safety.

The court ordered a preliminary injunction to block implementation of the label ordinance. In January 2018, the 9th US Circuit Court granted the San Francisco city attorney’s petition for a rehearing with a new 11 judge panel. Until this case is settled, warning labels will not be implemented in the city.

In June 2016, the Baltimore City Council held a hearing on a proposed warning label ordinance for which Healthy Food America provided testimony.  The ordinance did not get out of committee. Warning label bills have been introduced in the states of California, Hawaii, New York, Vermont, and Washington.  As of December 2017, none of these bills have passed yet.

For more information on warning labels: