Added sugars, as opposed to naturally-occurring sugars, in processed foods are a primary driver of the obesity epidemic and have direct metabolic effects that raise the risk of type 2 diabetes, hypertension, and heart and liver diseases. They also promote dental disease.

Diabetes. Drinking just one to two 12-oz sodas per day can increase your risk of developing type 2 diabetes by 26% and the risk of developing hypertension by 12%. More than 1 in 3 US adults has pre-diabetes, and 40 percent of all children are predicted to develop diabetes in their lifetime.

Dental decay. Regular soda consumption is associated with nearly twice the risk of dental decay in children. Adults who drink 1-2 sugary drinks per day have 30% more dental disease compared with adults who consume no sugary drinks.

Check out Sugar Science for more information on added sugars in packaged foods.

*Added sugars are sugars and syrups that are added to foods or beverages when they are processed or prepared. They don’t include naturally occurring sugars such as those in milk and fruit.

Sugar is added to three out of four of the products found on grocery shelves, making it nearly impossible to avoid. The typical American consumes about 17 teaspoons of added sugars per day, roughly 50 percent more than is recommended by the Dietary Guidelines for Americans (DGA) and the World Health Organization (WHO). To prevent chronic diseases and save lives, we must change the makeup and marketing of packaged foods to make it easier for Americans to reduce sugar intake to recommended levels, and to increase our consumption of healthful food.

Why take on sugar now? After years of research, we have a strong (and growing) body of scientific evidence that demonstrates the harm caused by added sugars. The media are sounding the alarm as well, helping Americans to get the message that excessive sugar is unhealthy and we should cut back. Overall, sugar consumption in America is declining, but it is still too high, and it varies by age, gender, race, and income. As a result, we continue to see the health impacts and inequities associated with overconsumption.

The U.S. consumes too much sugar!

The United States leads the world in consumption of added sugars and ranks third in the world in sales of sugary drinks. All of this sugar has consequences - the U.S. has one of the highest overall obesity rates in the world, and the highest rate of childhood obesityi. Over 30 million Americans have diabetes, and another 84 million are at risk of developing diabetesii.

Sugary drinks contribute to more than 52,000 deaths from cardiovascular disease every year in the USiii

*“Caloric sweeteners” includes corn syrup, cane and beet sugar, and other sweeteners such as honey, agave, and maple syrup
Source: Euromitor, obtained from Washington Post, Where people around the world eat the most sugar and fat, February 5, 2015.

While U.S. sugar consumption has begun to decline since 2000, it is still extremely high

The Dietary Guidelines for Americans 2015–2020 recommends limiting added sugars to less than 10 percent of our daily calories--about 12 teaspoons of added sugars per day. The American Heart Association sets an even lower limit, and makes recommendations based on age and gender.

On average, Americans of all ages are consuming more added sugar than recommended by the American Heart Association, the 2015 Dietary Guidelines for Americans, and the World Health Organization.

The charts above show how added sugar intake differs substantially by age and gender. The chart below shows that intake also varies by race and income. Overall, adolescents and young adults, Blacks, low income people, and men consume the most added sugar.

But average intake doesn’t tell the whole story. More than half of Americans (58 percent) exceed the Dietary Guidelines for Americans recommendation to limit added sugar intake to less than 10% of total calories. They are eating, on average, over 25 teaspoons of sugar a day, or nearly 20 percent of their total calories. Those who eat too much sugar also tend to eat more total calories and fewer healthy foods such as fruit, vegetables, and whole grains. 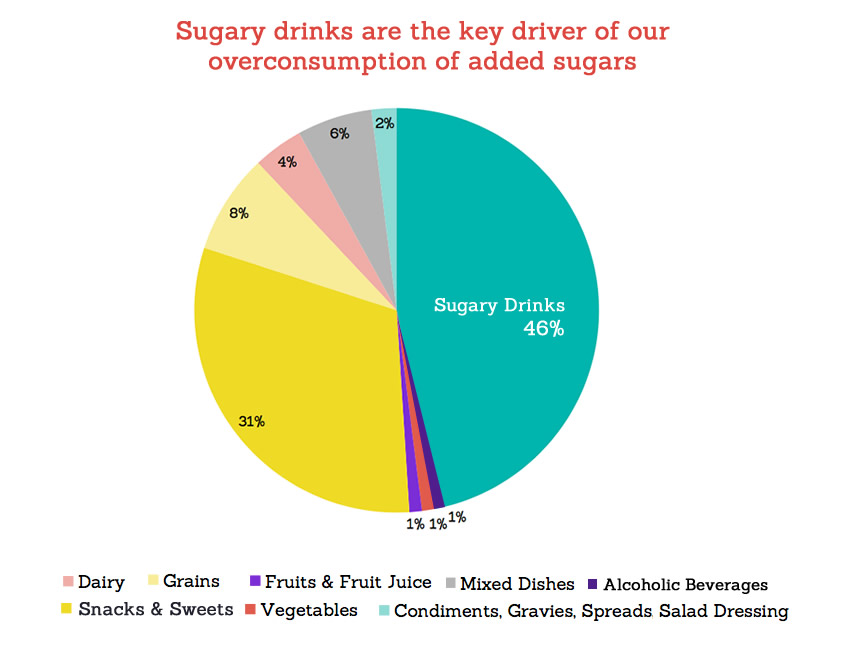 Snacks and sweets are the second largest source, contributing 31 percent of added sugars. The chart below breaks this category down further to show that grain-based deserts are a major contributor of added sugar, especially among older adults. Candy and breakfast cereals contribute relatively high proportions of added sugars among children ages six to eleven.

Where do we get most of these foods and beverages?

These days, sugary foods and drinks are available almost everywhere. We buy them in the obvious places such as supermarkets, groceries, and fast food restaurants. They’re readily available in our workplaces and schools, in government buildings, sports arenas, and movie theaters. But we can also easily find them in more unlikely places: gas stations, city parks, museums, sports stores, office supply and home improvement stores, even craft and hobby stores.

As you can see from the pie charts below, store-bought added sugars account for 65-70 percent of what we consume (depending on age). The total amount of added sugars from meals and beverages from restaurants, school cafeterias, and other sources is considerably lower. For example, the amount of added sugars contributed by school meals among the 12- to 19-year-old age group is 0.9 teaspoons/day, or about 15 calories per day. 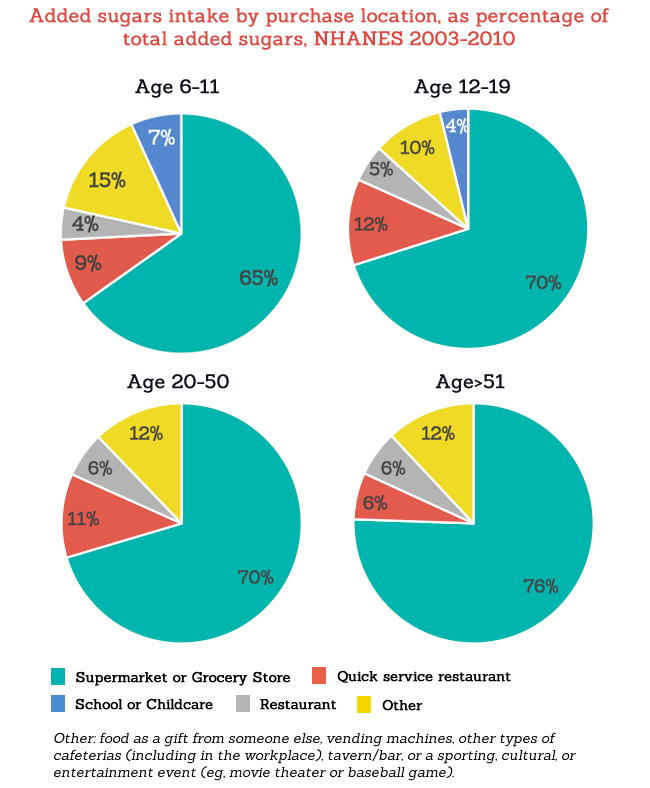 To find out about the rates of diabetes, obesity, heart disease, and other conditions associated with added sugar consumption, in your state, county, or city, check out these data sources from the Centers for Disease Control (CDC).