Under pressure, Pepsi says it will cut sugar. Can we believe it?

The timing of Pepsi’s announcement that it would reduce sugar in its soft drinks can’t help but fuel some skepticism: It comes as the beverage industry is pouring millions into fighting health-motivated soda tax measures, and days after yet another large jurisdiction – Chicago’s Cook County – proposed a sweetened beverage tax.

Indeed, Pepsi’s pledge all but acknowledges growing pressure from consumers, health experts and governments who recognize that Big Soda’s products are fueling our epidemics of diabetes and heart disease.

“Informed by the latest dietary guidelines of the World Health Organization and other authorities,” PepsiCo said in a statement, “[Pepsi will] reduce the sugar in its soft drinks so that, by 2025, two-thirds will have just 100 calories or fewer from added sugars per 12-ounce servings.” PepsiCo gave no specifics about which of its drinks would be reformulated.

Reactions to the announcement were mixed:

Public health advocate Kyle Pfister pointed out the announcement was strategically timed to affect tax legislation being voted on in November in Oakland, San Francisco, Albany and Boulder. He wrote, “This happened in Berkeley too, where the soda industry made a similar splashy voluntary commitment that grabbed headlines October 2014, just a month before the election.”

As Politico’s Helena Bottemiller Evich reported, “Monday's pledge is not the first time PepsiCo said it would cut back on added sugars. Back in 2009, the snack and beverage giant said it would reduce the average amount of added sugars in ‘key global brands’ by 25 percent by 2020 (compared with a 2006 baseline). But it has not come anywhere close to meeting that commitment.”

She added, “The company's new report acknowledges that added sugars are actually up 4 percent on average per serving since 2006.”

With only three weeks left until Election Day, Big Soda dumped another $4.5 million into its campaigns against the Bay Area sugary drink taxes. It has now spent over $24 million (and counting) on just the Bay Area alone this year. Add in the money it’s spent against Philadelphia and Boulder’s soda tax efforts and the total climbs to over $35 million for the year. It’s also just getting started spending against the newly proposed tax of one cent per ounce in Chicago’s Cook County.

Our new interactive map of the movement* includes this and all the other sugary drink tax and warning label efforts happening around the nation. These efforts put pressure on Big Soda to reformulate and cut sugar. For more information about sugary drink taxes, reformulation and other tools to bring sugar back to healthy levels, visit our sugar advocacy toolkit.

*Our new map of the movement was developed over the weekend at the Seattle GiveCamp hackathon -- an event where technology professionals donate their time to provide solutions for non-profit organizations. 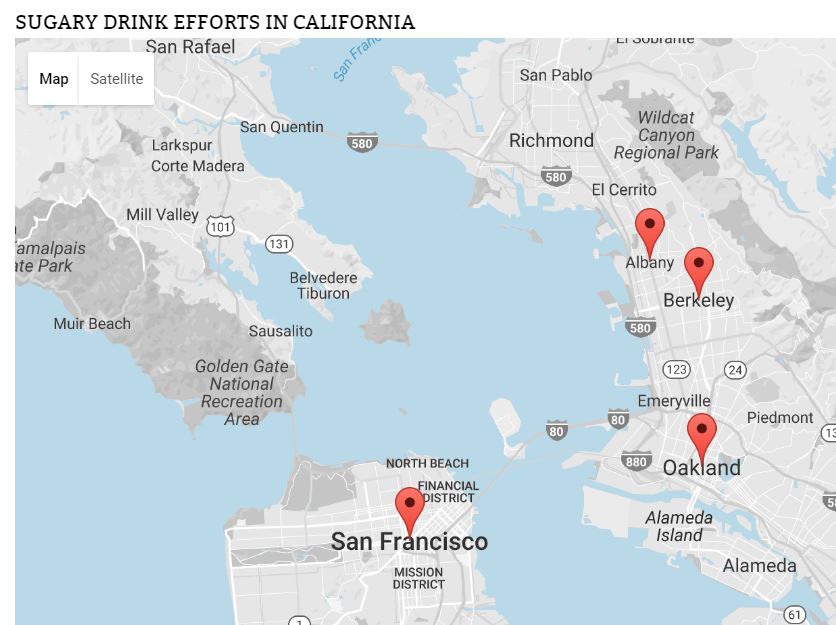