Dressing kids up as Coke cans to market soda

Coca Cola has been criticized repeatedly for marketing to children and promoting exercise in a bid to deflect from the role sugary drinks have played in the spread of obesity and Type 2 diabetes.  Those criticisms came to mind yesterday when the Department of Parks and Recreation for Washington, D.C. tweeted this picture of its young summer campers dressed up as cans of soda. 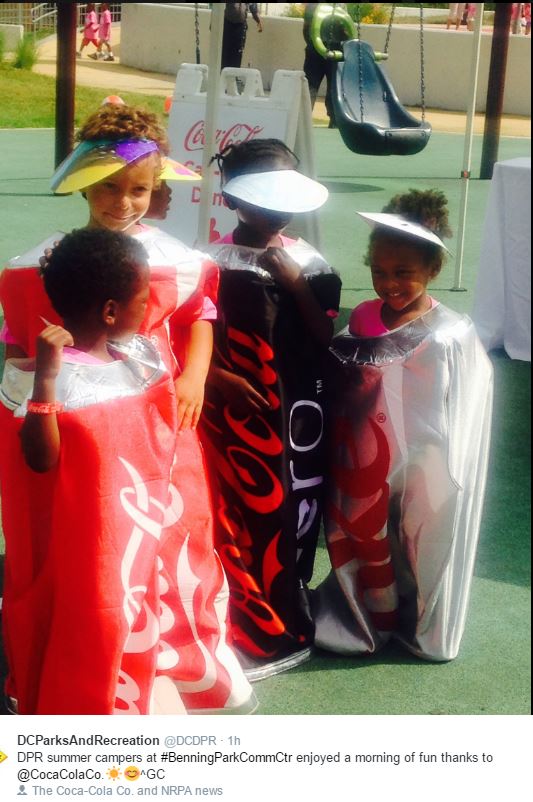 Parks and Rec was celebrating a ribbon-cutting ceremony for tennis and basketball court resurfacing funded by a grant from Coca Cola.  The soda giant is funding similar projects in the cities of Atlanta, Boston, Chicago, Los Angeles, Miami, New York, Newark and San Antonio.

It is no mystery why Coca Cola – under the gun for the health impacts of its sugary products – would fund physical activity projects as a way to “health-wash” its profits. A better question may be why cities would take the tainted money in the first place, especially when it comes with an unhealthy dose of product marketing aimed at their kids.

After all, as Berkeley and Philadelphia have demonstrated, there is a much better way to raise money for community benefit. Since Berkeley took on Big Soda and won a soda tax in 2014, the city has collected more than $1.4 million.  That money is supporting multiple community-based initiatives like Healthy Black Families’ “Thirsty for Change!” program to reduce health inequities and the YMCA’s head-start based efforts to instill lifelong good nutrition habits in children.

Philadelphia expects to raise $91 million annually from the tax and will use the revenue to fund universal pre-K and community schools as well as repairs to its parks, recreation centers and libraries.

This November there will be ballot votes for sugary drink taxes in three more California cities - San Francisco, Oakland and Albany- as well as Boulder, CO.

With the recent news that nearly one in five U.S. teens has prediabetes or diabetes, it’s time to stop letting Big Soda take advantage of the most vulnerable members in our communities. Philadelphia and Berkeley have shown communities across the country that taxes on sugary drinks are a viable way to recoup industry profits for important community priorities and alert residents to health harms from excessive sugar.  It’s time for more even more cities to join them in doing the right thing for the long-term health and life chances of kids.

If you’re tired of seeing kids used as marketing props and want to take a stand against products that are harming their health, join the movement at healthyfoodamerica.org.