In this month’s newsletter: Our latest edition of Research Watch highlights a new study that predicts 57% of US children will be obese by age 35, and more ... A WHO supply chain analysis looks at carrots and sticks for getting less added sugar in manufactured food and drinks ... A roundup of recent media coverage of the sugar reduction movement.

What actions will make the global food and drink manufacturing industry reduce the amount of sugar it adds to its products?  Corinna Hawkes, of the Centre for Food Policy in London, and consultant Fiona Watson recently analyzed the global food supply chain to find answers.  Their first insight: disincentivization matters.  The report, released by the WHO Regional Office for Europe, was presented to its member states in December 2017.  Read it here. 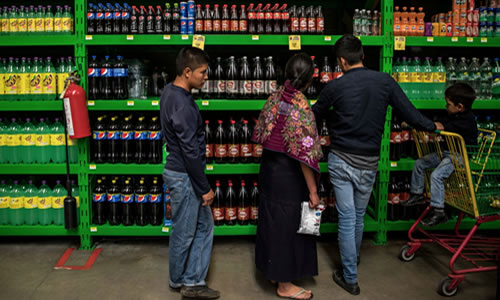 From the New York Times (photo by Adriana Zehbrauskas)

A Nasty, NAFTA-Related Surprise: Mexico’s Soaring Obesity. (The New York Times 12/11/17) “…[F]ree trade is among the key factors that have accelerated the spread of low-nutrient, highly processed foods from the West, ‘driving the obesity epidemic in China, India, and other developing countries worldwide,’ according to the T.H. Chan School of Public Health at Harvard.”

In Asia’s Fattest Country, Nutritionists Take Money from Food Giants. (The New York Times 12/23/17) “The research, conducted by scientists from the Nutrition Society of Malaysia... has produced several articles for peer-reviewed academic journals.  But scientists weren’t the only ones vetting the material.  One of the reviewers was Nestlé, the world’s largest food company, which financed the research.”

Geisinger Health Eliminates All Sugar-Sweetened Beverages from Campuses. (Fox 1/3/18) “’Sugar-sweetened beverages are the leading source of added sugar in the American diet, and play a significant role in the country’s obesity epidemic,’ said Andrea Feinberg, medical director of Geisinger’s Health and Wellness Program.”

Sticker Shock Over Seattle’s New Sugary Drink Tax. (KIRO 1/5/18) “’The hope is consumption of the unhealthy product -- which causes heart disease, diabetes -- will go down, the sugary drinks to go down, and we fully expect that to be the case,’ [Jim] Krieger said…. The $15 million Seattle expects to raise from the tax will go toward programs that will help people who are in need have better access to fresh fruits and vegetables. The money will also fund education programs.”

Coca-Cola to Sell Smaller Bottles at Higher Prices in Response to Sugar Tax. (The Guardian 1/5/18) “’I’m not surprised Coke is reluctant to reformulate given the “new Coke” debacle,’ said [Duncan] Brewer. ‘But they also have the negotiating power to pass the price rise on to retailers. I’m pretty sure they won’t eat the cost of the tax themselves.’”

The Big Washington Food Fight. (Politico 11/26/17) “Long the attack group for large companies like Kraft and General Mills on legislative and regulatory issues, [the Grocers Manufacturers Association] now has members like Nestlé opposing some of its positions…. ‘Some of these companies are realizing that being more progressive is a good place to be, from a marketing perspective,’ said Melissa Musiker, vice president and director of food and nutrition policy at APCO Worldwide, a public relations and consultancy firm.”

Sugar Tax: Why Health Experts Want It But Politicians and Industry Are Resisting. (The Guardian 1/9/18) “In a 2018 statement on nutrition the Australian Medical Association urged the government to introduce an SSB tax. This is significant because AMA is generally conservative when it comes to health policy and often avoids controversial debates. But it now wants a sugar tax ‘as a matter of priority.’”