The city-by-city approach to taxing sugary drinks has taken root with an enormous potential to impact the nation’s health for the better. If 15 more big cities adopt a sugary drink tax in addition to the 6 already passed this year, we could see nearly 4,000 fewer premature deaths and avoid health care costs of over $1.2 billion. … 2016 became the turning point in the health-driven movement to rein in sugary drinks and advocates in other places are looking to add more victories to the tally. There are several lessons from this year’s efforts they can apply to next year’s campaigns. … Don’t miss highlights from our recent media updates on sugary drink taxes and sugar. 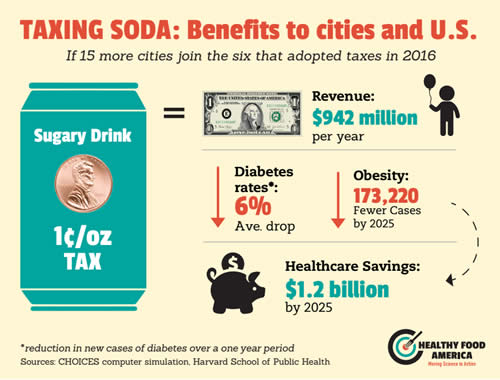 How great an impact can a city-by-city approach have on the nation’s health? We asked researchers at Harvard University’s T.H. Chan School of Public Health to use their evidence-based, peer-reviewed computer model to evaluate the impact should 15 more of the nation’s largest cities (with legal authority to do so) adopt a sugary drinks tax of one cent per ounce. Here’s what they found:

With a population of 15.3 million people in the 15 cities, the tax would cut diabetes rates by an average 6 percent and prevent nearly 115,000 of cases of obesity;

As a result, the nation would avoid $759 million in health care costs over ten years, 3,683 premature deaths would be averted and tens of thousands of people would live longer lives with less illness;

All while raising $600 million a year for community priorities, from initiatives to prevent chronic disease to promoting access to healthy food to providing universal pre-kindergarten and improving schools and recreation centers. Read more. 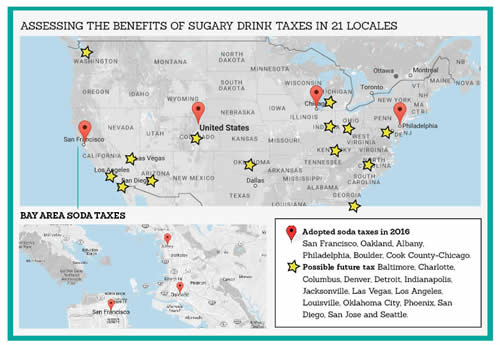 November’s stunning run of soda tax victories in the Bay Area, Boulder and Cook County, IL made 2016 a turning point in the health-driven movement to rein in sugary drinks. Both ballot-measure and legislative paths are viable but framing is critical. Political and grassroots organizing is key. Read more.

What a groundbreaking year for the movement to bring sugar back to healthy levels! The runaway success story of the year goes to sugary drink taxes. It was the year when both news and social media caught a sugar buzz, as new awareness came to light about the health harms from sugar and industry efforts to pooh-pooh it. Let’s build on the success of our efforts in 2016 and make next year another milestone in addressing health inequities fueled by sugar. Read more.