As 2017 sugar battle heats up, new HFA tools to help you win

Last year was a milestone in the movement to curb sugar, and those gains are starting to bear fruit in 2017.  Philadelphia's sweetened beverage tax took effect on January 1st and the city launched it's pre-K program. Meanwhile, Santa Fe is preparing to follow in Philly's footsteps with its own tax for pre-K. ... While licking their wounds after last year's losses, Big Soda is regrouping and girding for more battle. Our new Industry Watch looks at what they are up to, and a companion piece covers the messages they use and how to respond. ... Two of the seven places with soda taxes opted to include diet drinks. In two new publications, we take a look at both the policy and the health implications around artificially sweetened drinks. 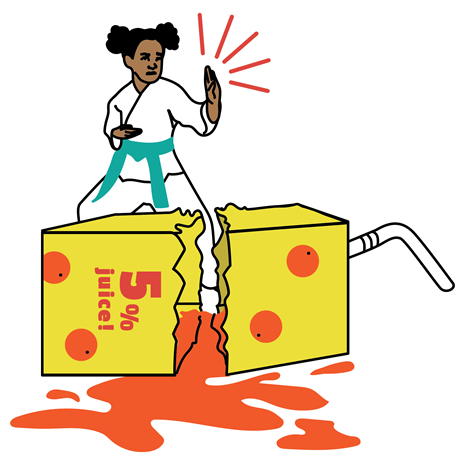 2017 is the year to chop back phony fruit drinks!
How do you like our new recruit?

The year 2016 was a milestone in the movement to curb sugar, and last year's gains are starting to bear fruit in 2017.  Philadelphia's sweetened beverage tax took effect on January 1st and the city used the revenue to launch its pre-K program with more than 2,000 children enrolled at 90 locations.  Big Soda had used the courts to try and this kill effort but a judge dismissed the lawsuit "in its entirety".  That decision is currently under appeal.

Santa Fe, NM is also looking to fund early education with a tax on sugary drinks, which Mayor Javier Gonzales described as a "game-changer" for early childhood investment. The 2-cents-per-ounce tax on sugary drinks could fund these critical programs if the City Council agrees in March to a special election in May and voters approve the measure. Meanwhile, tax bills have been dropped in state legislatures in Arkansas, Connecticut, Hawaii, Illinois, New York, Texas, with others expected. Read more.

Check out our first edition of Industry Watch. In this and future editions, Healthy Food America will track and reports news on the beverage industry of particular interest to those pursuing policies to reduce the added sugar consumed in soft drinks. In this edition, read about how Coke, Pepsi, et al misled or confused reporters with their own biased, industry-funded research and insisted failure to give their research equal weight would reflect a lack of "balance".

While the infamous Global Energy Balance Network has disbanded, Big Soda continues to peddle the same messages through its Balance Calories Initiative, an aggressive marketing campaign aimed at framing industry as part of the solution rather than the problem. As an antidote to some of that industry spin, check out HFA's new counter-marketing tool, Responding to Industry Arguments.

Diet drinks: To tax them or not?

Sugary drink taxes were conceived as a strategy to prevent chronic health conditions by reducing consumption of sugar. Recently, however, some jurisdictions have included artificially sweetened, or "diet", beverages. There is strong scientific evidence associating sugary drinks with higher rates of chronic diseases such as type 2 diabetes, heart disease, high blood pressure, liver disease and dental disease. The evidence of harm from diet drinks is less certain.

Therefore, we recommend not including diet drinks in beverage taxes. Our new policy brief describes the rationale for this conclusion and touches on additional legal, revenue and messaging considerations. An accompanying research brief seeks to answer the question, "Is diet soda healthy?" The bottom line: From a policy perspective, the evidence is not robust enough to justify taxing artificially sweetened beverages due to health risks alone. On an individual level, though, because diet drinks may pose health risks while their value for weight loss is uncertain, it is prudent to choose healthier drinks such as water.

Americans were making a lot of progress cutting back on sugary drinks. Now that's stopped. (Washington Post)
If Sugar Is Harmless, Prove It  (interview with Gary Taubes) (NY Times)
It's Time to Stop Shaming Poor People for What They Buy With Food Stamps (Mother Jones)