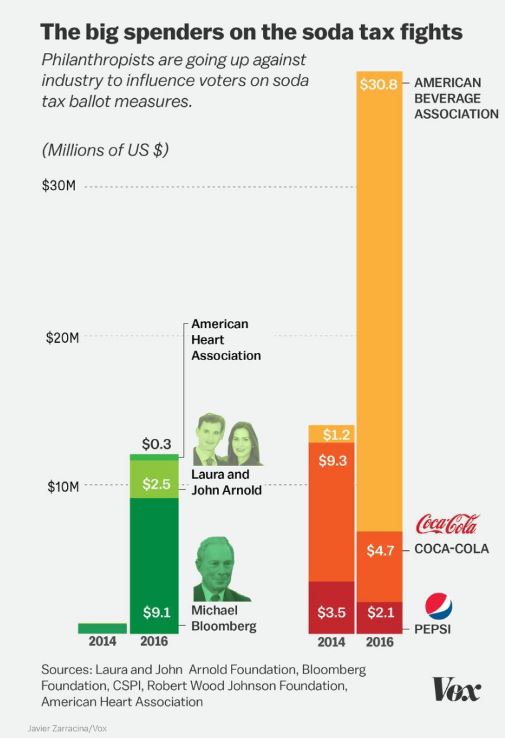 Big Soda has poured over $20 million into California alone which is even more than the $18 million in PAC donations to the federal election in the state. Big Soda is also spending about $4 per resident to sway voters in Albany, population 19,000. The sugary drink tax fight is Boulder’s most expensive campaign ever.

Much of that money is being spent on ads to deceive voters into thinking the tax on sugary drinks applies to all groceries. Millions of National Public Radio listeners yesterday heard about Coca Cola and Pepsi’s use of philanthropy to influence policy and the “grocery tax” deception earned them a comparison to the tobacco industry.

As I told the San Francisco Chronicle:

“It’s Big Soda using a time-honored tactic of taking a lie and saying it loud enough and enough times that people think it’s true.  The wording is crystal clear. It’s a tax levied on distributors of sugary drinks, and not on grocers and not on groceries.”

And the soda companies are well aware that it is a lie. Take, for example, these lines from a public affairs memo on the Philadelphia soda tax, revealed in a trove of leaked emails this week:

“TCCC [The Coca-Cola Company] opposes the Philadelphia tax proposal because it unfairly targets one product. … Many states impose sales taxes on foods and beverages, and our Company does not oppose these types of broad-based taxes.”

In internal documents, then, Coke and the ABA are clear that they oppose sugary drink taxes because they are on a single product, while they support sales taxes when they are on all products. In other words, they are in favor of grocery taxes. Elsewhere, the leaked emails reveal Coca-Cola considers sweetened beverage taxes to be among their biggest threats.

And it is a growing one.  In Chicago’s Cook County IL, Board President Toni Preckwinkle is working to garner the nine votes needed to pass the newly proposed tax of one cent per ounce.  This week she upped the odds of a successful vote by giving each board member control over a pot of money for local projects. Chicago area health advocates have jumped into action and are putting out this message: “Don’t let Big Soda sugarcoat the facts.”

In the Bay Area, author and activist Anna Lappé weighed in with an op-ed showing how “Big Soda is bullying us with their billions.” The president of the San Francisco Medical Society, Richard Podolin M.D., took on the “grocery tax” canard, noting that the California constitution outlaws taxes on groceries:

“The San Francisco Medical Society protests this deceptive campaign, which reminds us of similar efforts by the tobacco industry in the past. … We urge a ‘yes’ vote on Prop. V, for the health of all — especially children.”

In Colorado, the Region Director for American Diabetes Association, Julissa Soto,  wrote, “Colorado cannot afford to wait to address the growing diabetes epidemic. In addition to the disease’s terrible personal toll, diabetes also carries a tremendous financial burden, costing $3.6 billion annually in Colorado. With your support Boulder can be in the forefront of American cities taking action to curb the epidemic of obesity and diabetes.”

With less than three weeks until Election Day another report shows Healthy Food America as one of the top influencers in the debate over sugary drinks. We’ll help you keep up to date with ongoing efforts to bring sugar back to healthy levels and let us know what you think about our newest resource, the interactive map of the movement.