How added sugar can go the way of trans fat

Will new labeling requirements put added sugar on a similar trajectory to trans fat as companies face pressure to reformulate their products? Journalist Deena Shanker mulled that question in Bloomberg:

“Sugar is everywhere in the American diet, and now the Food and Drug Administration will begin highlighting just how much of the sweet stuff is added to what we eat…

Looking back at the trajectory of trans fat, which joined the Nutrition Facts box in 2006, this could, in fact, constitute the beginning of the end of added sugar.” 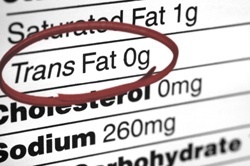 She went on to point out that many consumers already were learning to avoid trans fat even before government regulation helped remove most of it from the food supply.  We are seeing a similar trend with added sugar as soda sales reach a 30-year low and overall consumption recedes from the peak in 2000 – although it continues to far exceed the limits recommended in the Dietary Guidelines for Americans.

Trans fat differs from added sugar, of course, because there is no safe level for the former, while the dietary guidelines would limit added sugar to less than 10 percent of calories per day.  Nevertheless, wary consumers are likely to begin eschewing sugar in much the same way. However, simply providing the information is just a first step on a road to healthier food that also will require policy change and reformulation of processed foods to rely less on sugar.

Industry has plenty of room to reduce added sugar content.  Even the amounts of sugar in the same brands of soda vary across countries. For example, a can of Dr. Pepper sold in the United States has 36 grams of sugar, while in Thailand a can has only 22 grams.  The British grocery chain Tesco announced last year that it will reduce the sugar content of its house brand sodas by 5 percent per year.

Similar reduction targets should be in place for all products beyond a threshold for added sugar. Indeed, that is just what the FDA announced yesterday for salt – though at 30-plus years in the making, we have to hope that addressing sugar comes much, much sooner.

Meanwhile, food companies could do themselves, and us, a favor by starting the reformulation process well before the government requires it.  Even though they saw the writing on the wall with trans fat, industry groups spent millions and decades trying to delay the inevitable by spreading misinformation, fighting the science and lobbying against efforts to protect the public.  It almost certainly will take a movement to overcome similar tactics to delay bringing added sugar back to healthy levels.

A very recent case in point: When the FDA directed processed food makers to stop using euphemisms like “evaporated cane juice” the industry response was that "there is likely to be litigation over what is and isn’t added sugar."

“The case of trans fats should provoke us to consider how future risks might be prevented, detected or eliminated more quickly.”