Why the Olympics are key to sugar industry’s denialism

Coca-Cola’s sales and revenue fell during the second quarter of this year, so the soft drink giant is once again using the Olympics to health-wash its sugary soda. But this time around more and more people are unwilling to ignore how soda and sports are jarringly incompatible. Health advocates from around the world have organized campaigns to highlight why it’s time for Coca-Cola’s sponsorship of the Olympics to go the way of Virginia Slims’ sponsorship of tennis.

This was the message Australian advocates used for media and bus advertisements: 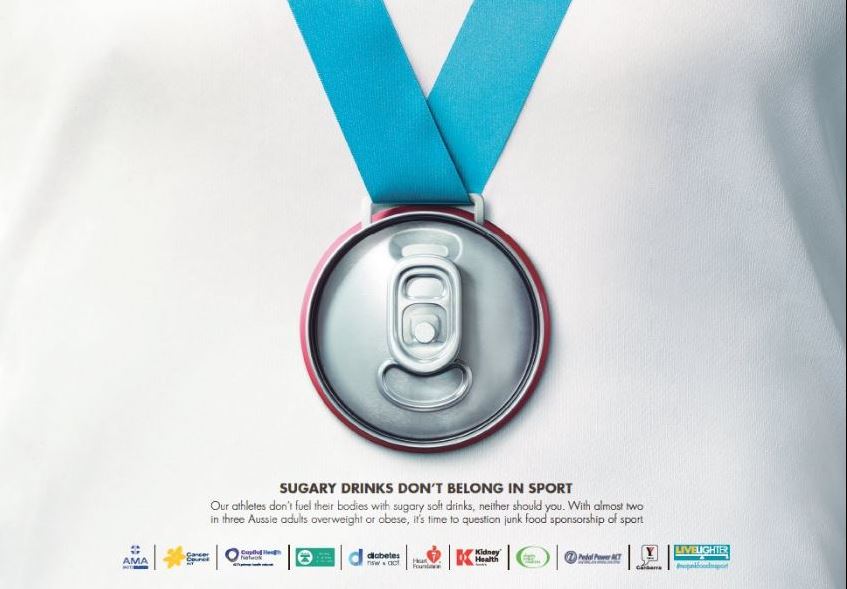 Advocates in the United Kingdom criticized the Rio Olympics' "carnival of junk food marketing” and said, "The Olympic Games should be a beacon of human progress and ability, not a place where poor nutrition is given a halo of gold."

Celebrity chef Jamie Oliver told the Daily Telegraph of his goal to reform the International Olympic Committee’s heavy reliance on money from Coca-Cola by the time Tokyo hosts the Olympics in 2020. He said, “It’s probably my most audacious thing I’ve dreamt up. And I don’t know if I have what it takes to pull it off.”

To be sure, sugar purveyors will fight such an effort with trainloads of cash and every trick in their playbook of deflection and denial. That playbook was laid out with stark clarity in this recent analysis of the sugar industry’s attempts to influence the World Health Organization as it adopted its 2015 guidelines for sugar intake. The researchers wrote:

Industry’s representatives tried to confuse by raising red herring issues such as discussing different types of sugar and whether added or total sugar was more important. They argued for “unrealistic expectations for scientific research” that would produce unattainable ironclad results. They tried to “divert attention to other risk factors, such as a lack of physical activity, which excused the sugar industry from responsibility.”

Taking a cue from the alcohol industry, they worked “to shift attention from measures to reduce sugar consumption towards measures to avoid harm: for example, the prevention of dental caries by water fluoridation and the use of fluoride toothpaste.”

This practice of “denialism” was brought to harsh light last year when New York Times reporter Anahad O’Connor exposed how Coca-Cola funded scientists who shift blame for obesity away from bad diets.  He wrote, “Health experts say this message is misleading and part of an effort by Coke to deflect criticism about the role sugary drinks have played in the spread of obesity and Type 2 diabetes.”

If you’re tired of seeing Coca-Cola use the Olympics to promote sugary soda, now is the time to act. In order to change the status quo for the 2020 Olympics in Tokyo, advocates from around the world will need to join forces and dismantle the sugar industry’s denialism.  If you want to be part of that change, join the movement at healthyfoodamerica.org.