For the Bay Area, the researchers project that the tax of one cent per ounce would raise prices on sugary drinks by 16.3 percent, leading many consumers to shift to water or other, less harmful drinks, so that soda consumption drops by nearly 20 percent. (Berkeley, where a tax has been in effect since early 2015, saw a 21 percent reduction among low-income communities.)

As a result of that shift, the incidence of diabetes would drop by an estimated 4 percent when the tax reaches full effect after a few years. The model also estimates nearly 6,000 fewer people would be burdened with obesity at the end of 2025 than without the tax

The three ballot initiatives combined would raise at least $22.2 million a year for programs to improve children’s health and prevent diseases associated with excess sugar consumption.

“When these three cities join Berkeley, whose soda tax already is having an impact, the Bay Area will lead the nation in saving lives by taking bold steps to prevent chronic disease,” said HFA Executive Director Jim Krieger. “The Bay Area’s actions will especially help low-income people and communities of color, who are disproportionately targeted both by the marketing of sugary drinks and the diseases associated with drinking them regularly,” he added. 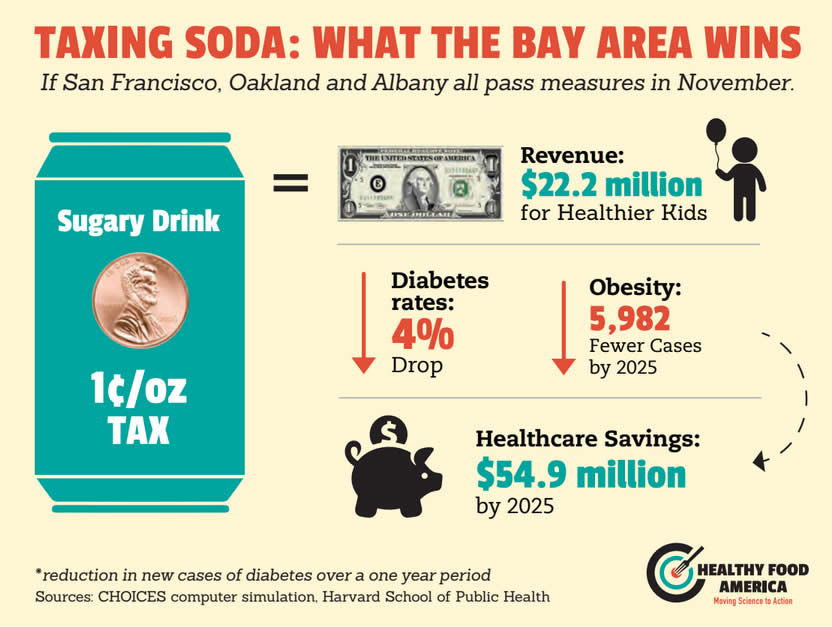 For Boulder, the researchers project that the tax of 2 cents per ounce would lead the incidence of diabetes to drop by an estimated 10 percent when the tax reaches full effect after a few years. The model also estimates 940 fewer people would be burdened with obesity at the end of 2025 than without the tax.

Reducing the chronic diseases associated with excess sugar and weight gain would cut healthcare costs by $6.4 million over 10 years in comparison to taking no action. The net savings in obesity-related healthcare would be more than 40 times the cost to administer the tax, according to the model.

Boulder’s citizen-led initiative would raise as much as $3.8 million a year for programs designed to increase access to healthy foods, and other health programs for those most impacted by the diseases associated with sugary drinks.

“In addition to the clear benefit of providing revenue to improve lives, this research shows that Boulder’s measure would also save lives and healthcare dollars,” said Krieger. 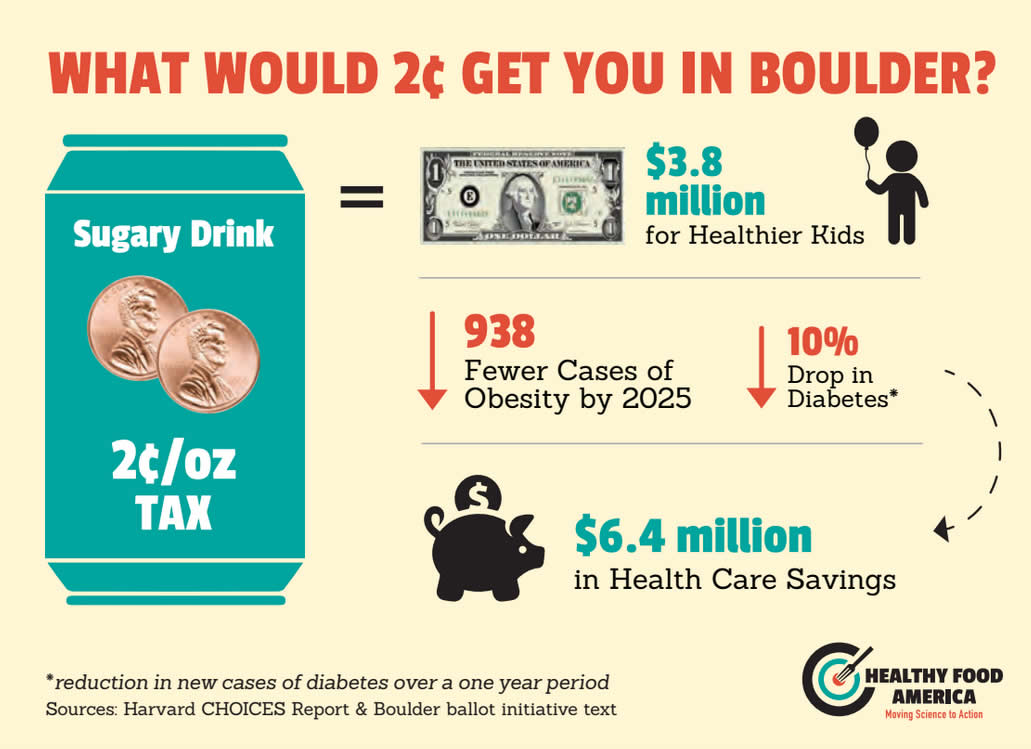 “Our analysis looks beyond revenue and finds that this excise tax on sugary drinks can generate significant prevention of new cases of obesity, diabetes, improved quality adjusted life years and healthcare cost savings,” said lead investigator of the CHOICES Project, Dr. Steven Gortmaker, who also serves as the director of the Harvard Prevention Research Center and a professor of the practice of health sociology at the Chan School of Public Health. “It is our intent that these findings serve as a source of research-based information surrounding potential health impacts of sugar-sweetened beverage taxes.”

For more information about taxing sugary drinks, see our resources.