Last week the United Kingdom’s government released its long awaited childhood obesity plan, but it was a major disappointment to advocates who’d been hoping for meaningful change.  Using British slang for garbage and a letdown, headlines proclaimed it a “sugar-coated codswallop” and a “massive damp squib”.

The plan left out major components that had been recommended for inclusion by Public Health England’s review of the evidence-based science. This is why health advocates called it an “insulting response to the UK crisis in obesity type 2 diabetes” and said “the government’s plan is underwhelming and a missed opportunity”.

Celebrity chef Jamie Oliver, who’d used his fame to rally public support for the tax on sugary drinks announced back in March, expressed his disappointment in the new plan because “so much is missing.” He also shared this infographic which captures the many ways it came up short. 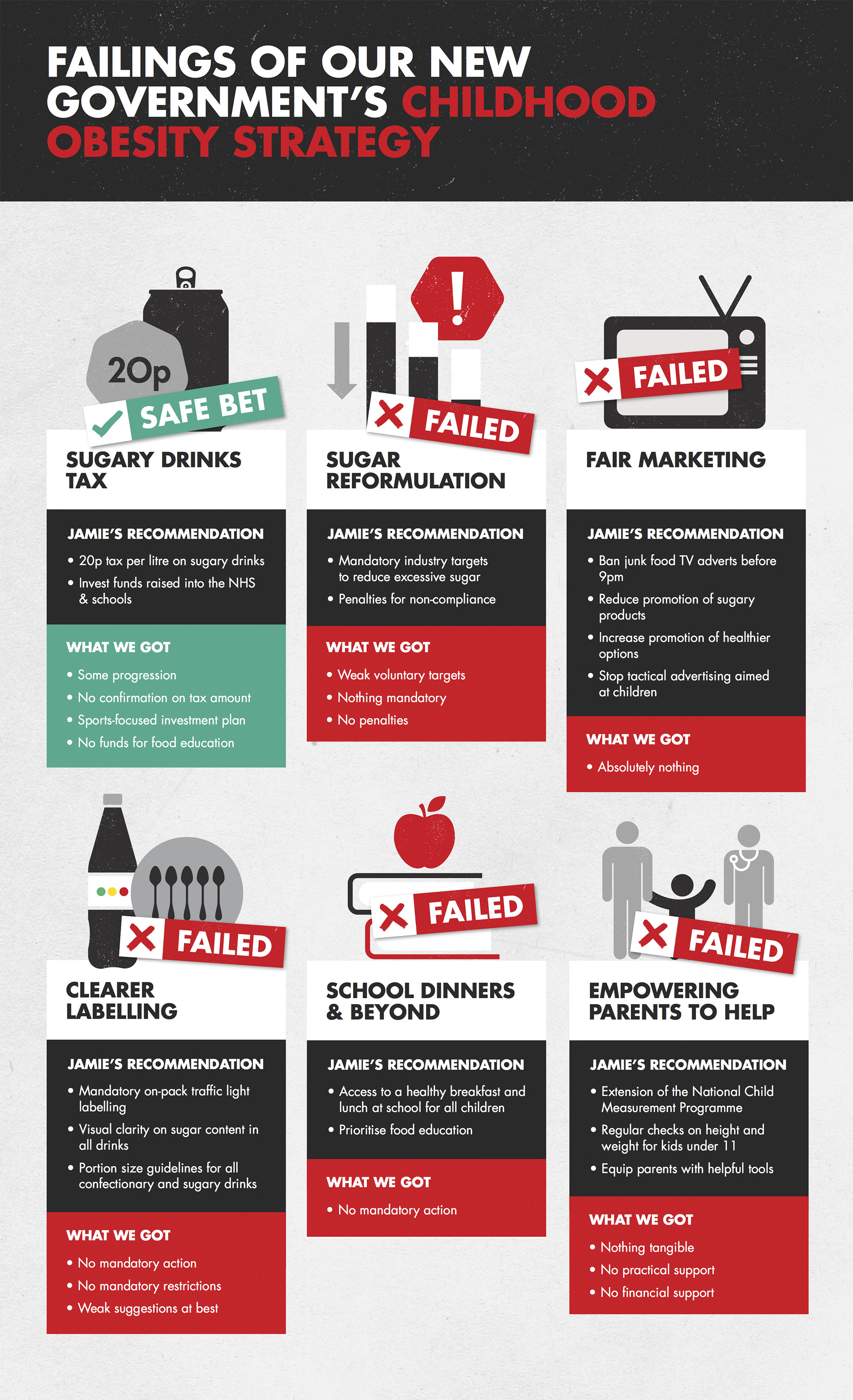 It wasn’t just health advocates who noted the plan’s shortcomings.  A major retail consortium pointed out the need for mandatory industry targets to reduce excessive sugar in order to level playing field.  But none of this was enough to counter the influence of Big Food’s lobbyists who met with government health officials 40 times before the watered-down obesity strategy was issued. Official records revealed these meetings included representatives from Coca-Cola, Nestle, Kellogg’s, McDonald’s, the powerful Food and Drink Federation and the Advertising Association trade group.

As one British political leader noted, “It is becoming more and more clear that there was influence to water this report down. A sugar-coated report might serve big business well, but weakens the fight to tackle childhood obesity.”

Watching from across the pond, advocate Bettina Siegel pointed out the similarities to what has happened in the United States:

“All of this is reminiscent of several failed attempts here in the United States to similarly ban junk food advertising to children, even including a purely voluntary federal scheme that was decisively crushed by Big Food back in 2012. Instead, we’re left with an industry-led effort – the Children’s Food and Beverage Advertising Initiative – which, according to experts, has done virtually nothing to shift ‘the landscape of food marketing to children away from an overwhelming emphasis on obesogenic products.’”

Big Food may have won yet another political battle at the expense of children’s health but there is a growing recognition that this is unacceptable.  As former food industry executive Hank Cardello wrote in his message to corporations:

“Today’s brand leaders must adopt the fifth ‘P,’ protection. That is, every action a brand takes must ensure that any and all vulnerable populations are protected. This means that food companies must make children, low-income populations, health-compromised consumers, and any other vulnerable groups off limits for products and practices deemed less healthy. To put it another way, food companies’ exposure multiplies when Double Gulps and large-sized French fries are promoted to kids under 12, or when sweet goods like Twinkies and Little Debbie snacks are prominently displayed throughout stores in low-income neighborhoods.”