Yesterday, Baltimore City Council's Health Committee heard more than three hours of testimony on a proposal to require health-warning labels for sugary drinks at the point of sale. (The measure is expected to be taken up again in a July work session.) Robi Rawl of Sugar Free Kids Maryland told me the proponents included a diverse, locally representative audience and made a very strong showing. I was not able to attend in person, but advocate Carol Hazen presented the following statement on my behalf:

For 25 years I worked in the public hospital of Seattle, where nearly all of my patients had chronic diseases like diabetes or heart disease. In most cases, unhealthy diets caused and worsened their conditions.  I recall one patient who was struggling to manage type 2 diabetes. He was confident he had a healthy diet – but he was drinking a gallon of fruit punch a day. Because it was marketed as a healthy, fruit-based drink, he thought he was making a healthy choice. Once he became aware of how much sugar it contained, he cut it out and his diabetes control improved dramatically. 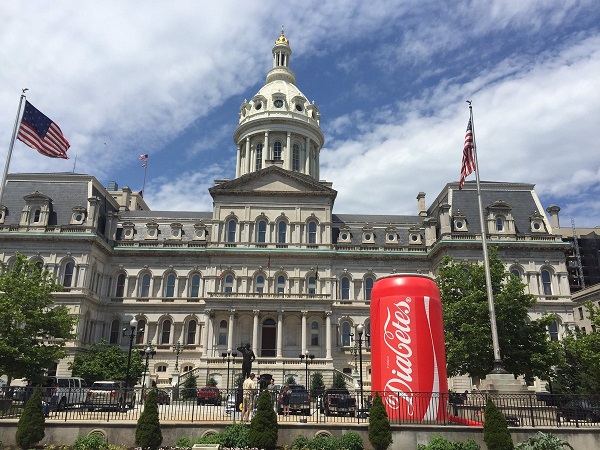 After years repeating conversations about the dangers of products with excessive amounts of added sugar, I realized that I was no match for the industry’s marketing to “open happiness” and “live for now.” To make a real difference, I needed to promote healthy food policies. So I started a national non-profit called Healthy Food America to act on the growing scientific evidence of the harmful health effects of added sugar. I became convinced that I needed to promote high impact policies that drive down added sugar consumption.

Here is what convinced me.

People drink too many sugary drinks – half of adults and 2/3 of teens drink them daily, leading to an average per capita consumption of 40 gallons per person per year.  In Baltimore, one in four youth drink one or more cans of soda per day.

And these drinks are dangerous. Consuming sugary drinks contributes to weight gain and obesity,  diabetes, heart attacks,  and dental caries in children .

Yet many people are unaware of the health risks of sugary drink consumption. Research shows that many parents, especially from low-income and minority communities, believe fruit drinks are a healthy alternative to soda for their children, yet they are just as bad. These are the same communities targeted by misleading industry advertising. Sports drinks, also no different than soda, are perceived as promoting hydration and health.

This lack of knowledge is not surprising. Beverage companies spend a billion dollars a year to market sugary drinks, particularly to children, youth, and communities of color – and it works all too well.

The onslaught of industry advertising must be balanced with accurate information about the health effects of sugary drinks from trusted sources so consumers can make informed choices. Placing warning labels on sugary drink ads is one important and highly visible way to do so.

Warnings would help Baltimore parents protect their kids. A recent study found that parents who read a warning label were significantly less likely to choose a sugary drink for their kids.

If Baltimore were to adopt a warning label policy, it would join a growing trend to provide consumers with the information they need to make healthy choices. Just last month, the U.S. Food & Drug Administration acted to require listing of added sugars on the nutrition fact panel.

San Francisco adopted a warning label ordinance in 2015 and just last month, a federal judge dismissed an industry suit to block implementation, saying “The City has a legitimate interest in public health and safety, and the warning that sugar-sweetened beverages contribute to obesity and diabetes is reasonably related to the City’s interest in public health and safety.”

Had my patient with diabetes had the benefit of seeing a warning label on the fruit drink he consumed every day, he would have been alerted that the product he thought was healthy actually contained enough added sugar to harm his health.

Warning labels have the potential to improve heath in Baltimore, and I applaud the Council for considering this important health issue.