The beverage companies are pouring a great deal of money into opposing the measures on the November ballots, but proponents are getting some aid. Boulder’s soda tax proponents received financial help to take on Big Soda from the American Heart Association and Healthier Colorado, an offshoot of the Colorado Health Foundation. Soda tax proponents in San Francisco and Oakland received more than $1.5 million from former New York City Mayor Michael Bloomberg to help even the playing field against the millions of dollars corporations like Coca-Cola and PepsiCo are spending.

A new report and infographic from the Center for Science in the Public Interest (CSPI) shows the soda industry has spent a minimum of $67 million since 2009 to defeat soda taxes and warning labels in 19 cities and states. “There is no better way to understand the public health importance of soda taxes and warning labels,” said Jim O’Hara, CSPI’s health promotion policy director, “than to see how much money Big Soda is willing to spend to oppose them.”

Some of that money has been used to flood the Bay Area with deceitful mailers warning of a “grocery tax”.  Supporter Malia Cohen of the San Francisco Board of Supervisors and others have pushed back, noting that the tax is on distributors of “death-causing sugary drinks” and that truly nutritious groceries will be completely untouched.

Diane Woloshin, director of the Coalition for Healthy Oakland Children and a former health care program administrator for the Alameda Public Health Department said of Measure HH, “It’s really about the health of Oakland children.” The Editor of Beyond Chron wrote that San Francisco’s Prop V will “reaffirm the city’s place as a national public health leader.”

Advocates have also rolled out a satirical 'pro-soda' mascot, Sammy Soda, who’s been “known to pop up at political events in a soda can suit that reads ‘diabetes’ in Coca-Cola's signature font.” Commenting on the soda industry’s deceptive mailers, Sammy told a San Francisco reporter:

“There have been a dozen pieces of mail so far.  You can thank me for that. You know, I'm just trying to completely overwhelm the facts and the courts with cash." 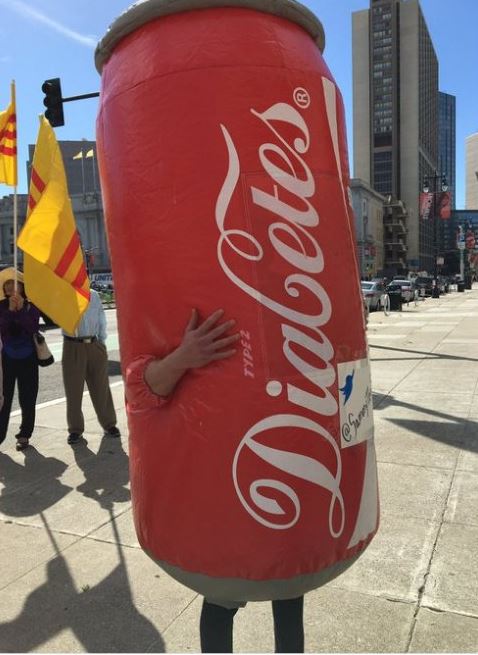 Meanwhile, well-known marketing guru Alex Bogusky, who was part of the advertising agency that helped market Coca-Cola, wrote a letter to Boulder’s newspaper about why he supports the soda tax:

“The soda companies want every person to drink soda like water, and at every meal. That is their plain and simple goal…

Boulder has the creativity and willpower to stand up against the Big Soda agenda and say ‘Yes’ on 2H. Our goal should be to set an example for our kids and for the country. ‘Yes’ on 2H can be the moment when America stops getting sicker and begins to get healthier — for generations to come.”

Boulder's newspaper reported that some of the businesses the "No on 2H" campaign named as supporters say they were duped into participating. Those businesses are now disassociating from it "saying they didn't realize they were consenting to be part of official campaign material, and that the No on 2H solicitors didn't accurately represent their interests."

After losing the political fight over sugary drink taxes in Philadelphia, the American Beverage Association, representing Coke, Pepsi, Dr. Pepper and other sugary drink manufacturers have filed a lawsuit to block the soda tax.  This lawsuit jeopardizes pre-K for the city’s most vulnerable kids, which is funded by the soda tax.  Philadelphia Mayor Jim Kenney commented:

“I think it’s very repugnant that million-dollar companies would be exercising these legal rights to keep our young people in our communities from having a good education, a healthy school environment and great parks and rec centers, while they’re selling their product to these same very people.”

His administration has budgeted $1.6 million to fight the legal challenge and Kenney said he is confident the city will prevail.  To stay up to date with all the latest soda tax campaign developments happening around the country, sign up for our daily media updates at healthyfoodamerica.org.