The Illinois tax would raise an estimated $561 million a year to fund vital state functions, including health programs and Medicaid. The revenue estimate, prepared by Frank J. Chaloupka, PhD, a health economist at the University of Illinois at Chicago, takes into account the existence of a Cook County tax of one cent per ounce on both sugary and diet beverages. 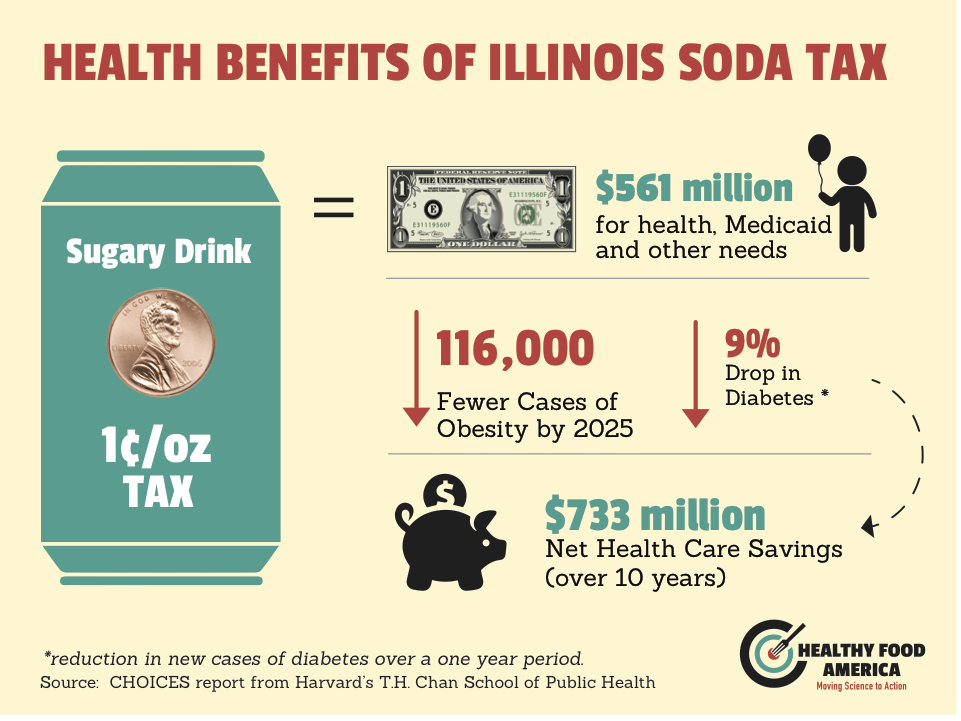 Communities across the country and world are adopting taxes on sugary drinks – as they have on tobacco – to raise revenue for social and health programs while at the same time discouraging overuse of products linked to obesity, diabetes and heart, liver and dental disease. The World Health Organization last fall called for governments to tax sugary drinks as part of the global strategy to combat chronic disease and obesity.

“Our analysis looks beyond revenue and finds that this excise tax on sugary drinks can generate significant prevention of new cases of obesity, diabetes, improved quality adjusted life years and healthcare cost savings,” said lead investigator of the CHOICES Project, Dr. Steven Gortmaker, who also serves as the director of the Harvard Prevention Research Center and a professor of the practice of health sociology at the Chan School of Public Health.

“In addition to the clear benefit of providing revenue to for critical state functions, this research shows that the Illinois measure would also save lives and healthcare dollars,” said Dr. Jim Krieger, MD, MPH, executive director of Healthy Food America (HFA), a leading health policy think tank. HFA funded the researchers to localize the national CHOICES model for Illinois.

“The greatest beneficiaries,” Krieger added, “are likely to be low-income and communities of color who are disproportionately targeted both by the marketing of sugary drinks and the diseases associated with regular consumption of them.”