“This has been a watershed year for efforts to tax sugary drinks as the health hazard they represent,” noted our executive director Jim Krieger.

In 2016, five U.S. cities – Philadelphia, Boulder, San Francisco, Oakland, and Albany, CA – and Cook County (Chicago), IL have adopted soda taxes as a way to raise revenue for important community priorities while encouraging residents to shift away from products that contribute to diabetes, heart disease and other chronic health issues. They join Berkeley, CA, whose voters in 2014 became the first in the nation to approve a sugary drink tax.

But how great an impact can a city-by-city approach have on the nation’s health? Substantial, as this report will show. HFA asked researchers at Harvard University’s T.H. Chan School of Public Health to use their evidence-based, peer-reviewed computer model to evaluate the impact should 15 more of the nation’s largest cities (with legal authority to do so) adopt a sugary drinks tax of one cent per ounce. The researchers – who operate independently of HFA – also projected benefits for the six jurisdiction that passed taxes this year. (Find the results for each city here.)

“By following the example of the seven that have already acted,” Krieger said,  “cities have a golden opportunity to help their people avoid premature death and illness and cut health costs while raising revenue to make residents’ lives better in other ways, as well.”

The researchers project that the tax of one cent per ounce would raise prices on sugary drinks by 16.3 percent, leading many consumers to shift to water or other, less harmful drinks, so that soda consumption drops by nearly 20 percent. (Berkeley, where a tax has been in effect since early 2015, saw a 21 percent reduction among low-income communities.)

As a result of that shift, and adding the projected health gains for the six places with existing taxes to those of the 15 cities above, we would see: 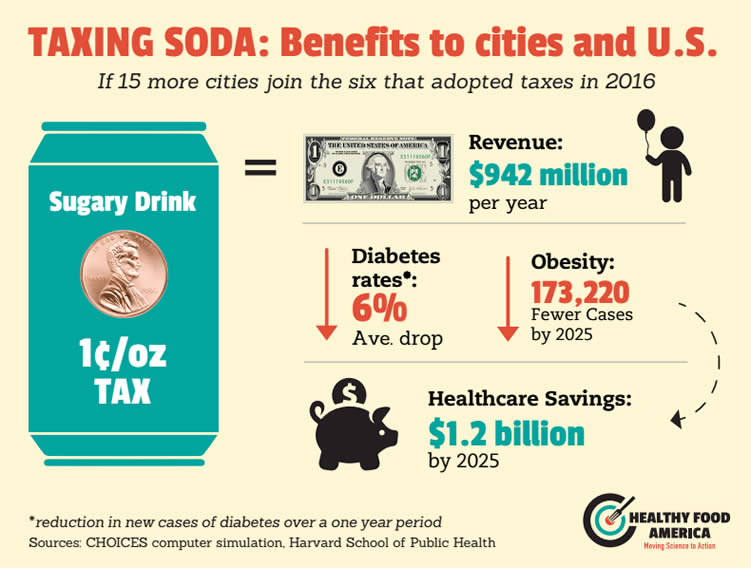 The full CHOICES briefs can be found here.

“Our analysis looks beyond revenue and finds that this excise tax on sugary drinks can generate significant prevention of new cases of obesity, diabetes, improved quality adjusted life years and healthcare cost savings,” said lead investigator of the CHOICES Project, Dr. Steven Gortmaker, a professor of the practice of health sociology at the Chan School of Public Health. “It is our intent that these findings serve as a source of research-based information surrounding potential health impacts of sugar-sweetened beverage taxes.” 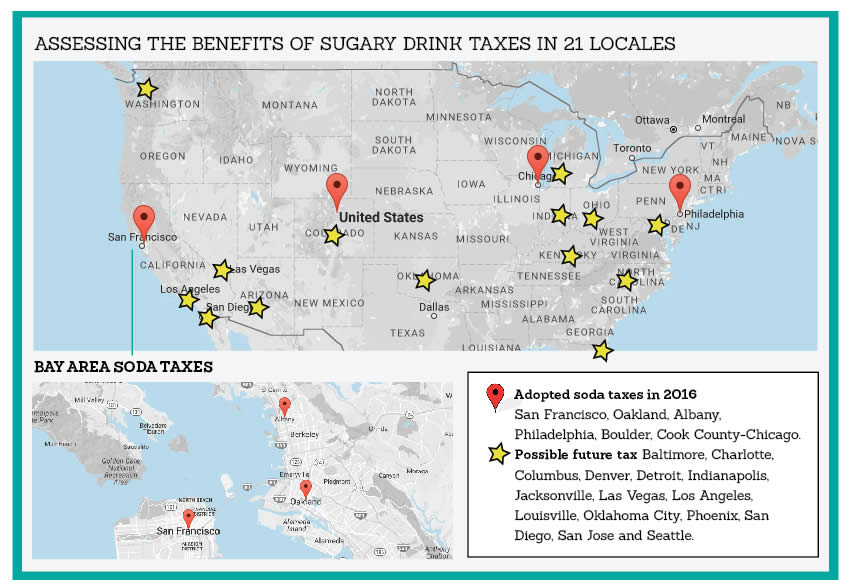